Thanks to our “new” 2003 Diesel Renault Megane, Kirsten, the boys and I had the freedom to get out of town this last weekend. On Friday we traveled to an “Ethno Village” called “Stanisici,” located just this side of the Serbian border, eight kilometers beyond Bijelinja, in the Republik Srpska, one of the three entities created by the Dayton Peace Accords. Then on Saturday we traveled in nearly the opposite direction toward Sarajevo, where, in Olovo, we visited an ancient pagan stone circle located on the grounds of the local Orthodox Church, before heading to Bijambare, a public regional park with well-groomed paths, bathrooms, a restaurant, and — at the end of a two kilometer hike — six spectacular caves. Stanisici, the “Ethno Village,” is part of the unfolding dream of Slobodan Pavlovic, the 71-year-old Serbian-American property multimillionaire who created the village as a testament to his Serb heritage. Bijambare and its caves were created following the last ice age and are open to visitors thanks to public contributions from citizens in the Canton of Sarajevo. Stanisici and Bijambare epitomize two very different paths into the future, not simply for Bosnia and Herzegovina, but also for the world. 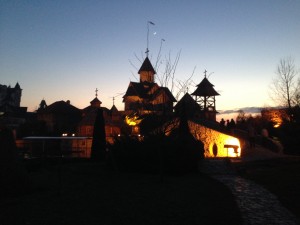 I had passed Stanisici several times on my way to Belgrade and so I was naturally curious about this “traditional” village, which some in the press have labeled the Republika Srpska “Disney Land.” First, as a disclaimer, initially I found the entire setup completely disarming, even whimsical, on the order of Jackalopes, Area 51, and the villagers living inside of Donald Trump’s toupee. But, then it did seem a tad odd that the Orthodox chapel and monestery at Stanisici are the real thing, with real services, and real bishops and the like. Now you won’t see that at Disneyland! Yes, right wing evangelical Christians in the US also have their theme parks — and the Mormons own their own theme park Mecca (Great America!); all channeling their proceeds into making sure that we all have sex with the right partners and drop bombs in the right countries. As the saying goes, “One homophobic, misanthropic, psychopathic militarism is as good as the next one.” Yet, at least according to one journalist (Blood, money, bricks and mortar (The Independent 10-Nov-04)), the multimillionaire founder of our Ethnic Village — and the accompanying University, and the nearby bridge and border crossing, and the olympic water training facility, and all of the stores and hotels and roads and the city and region surrounding all of this — intends to annex the Republic of Srpska by default, purchasing it and declaring it a part of Serbia. And he might just get away with it. 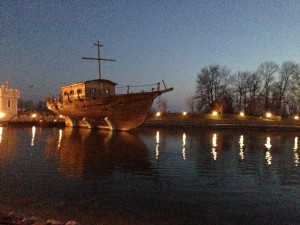 Contrast Stanisici to Bijambare. Next to Mr. Pavlović’s hallucination, Bijambare is small potatoes. Its only ambition would appear to be preserving a national monument so that Bosnian and Herzegovinian schoolchildren and their parents can learn about the geological history of this small slice of the Balkans. There is not one thread of nationalistic fabric in the entire park. Nothing at all whimsical. But, instead, just a real pleasure. 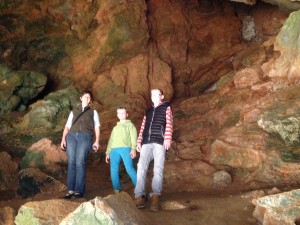 Would it be wrong to see in Mr. Pavlović’s hallucination prefigurations of the impending violence that everyone, I mean everyone, feels will soon return to this region? No. But that is not my point. As I have maintained all along, Bosnia and Herzegovina is our future, the world’s future; that is, if we cannot figure this out in time. But what would that entail?

One commentator on Mr. Pavolović speculated that he was simply a wealthy, kind-hearted, but naive nationalist. And perhaps that is true. (Did I mention that Mr. Pavolović purchased a seat in the Republic of Srpska Senate? Well, he did.) But this begs the question: in what kind of a world can wealthy, kind-hearted, nationalists purchase cities or regions, build bridges and border crossings, and seriously contemplate annexing whole territories for their Church, their Bishop, or their Nation? In what kind of a world does that happen?

Such things happen in a world where public assets have been sold to the highest bidder, where law is made and enforced by a private plutocracy, where what used to be called “the public” is now the play toy of private enterprise, and where real-world policy has long since passed from res publica to oikonomia — from “the wealth we hold in common” to “private enterprise.” To be sure, we still enjoy our token public monuments — like Bijambare. But they are really just tokens. The real power — and all of us know this for a fact — belongs to the Slobodan Pavolovićes of this world. And it belongs to them not because of any hidden secret of the market, but because of what the market has written in bold letters all across its banner: WORLD FOR SALE TO THE HIGHEST BIDDER!

Obviously this motto conflicts, by definition, on its face, with the highest republican values, institutions, and ideals. But, in all fairness, Mr. Pavolović is doing nothing illegal. He is following all the rules. He is living the dream. He is creating the dream. Only were the public to suddenly acquire sufficient education, leisure, shared wealth, and good health — only then might the public be able to reverse this complete privatization of what once was republican life.

Now, that IS a hallucination!