Were we not specifically looking for the Jewish Museum and the Old Synagogue Holocaust Memorial, they might have been lost to us as minor details in the middle of the vast historical expanse spread out before us in Prague. At first this seems incomprehensible. In March 15, 1939 in Prague alone there lived 125,000 Jews. And between October 1941 and October 1944, between 75,000 and 85,000 Moravian and Bohemian Jews were transported to death camps throughout central and eastern Europe. Fully 800,000 Jews lived in the former Hungarian Empire. 600,000 lost their lives to forced labor, starvation, disease, and death camps. So it would seem a minor detail impossible to overlook. And, yet, we might easily have missed it. 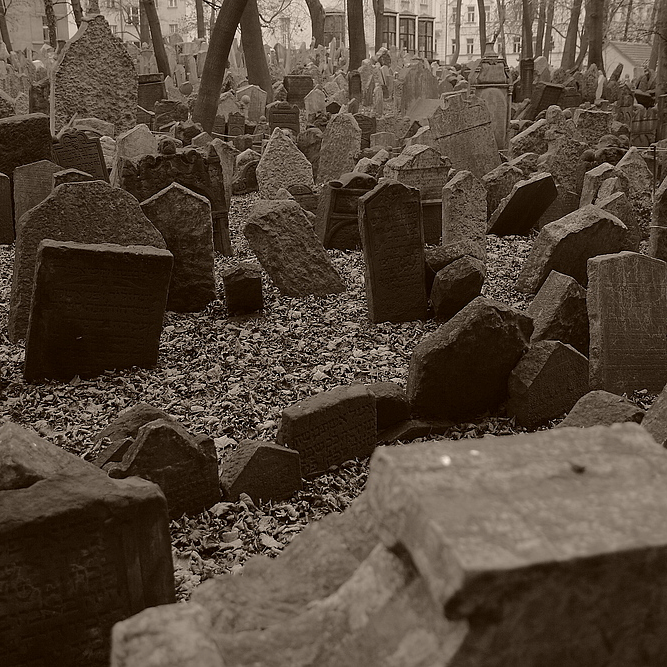 This would appear all the more incomprehensible if we consider the long list of famous Jews from Bohemia, a list that includes Edmund Husserl, Franz Kafka, Gustav Mahler and Sigmund Freud. How did I miss this? 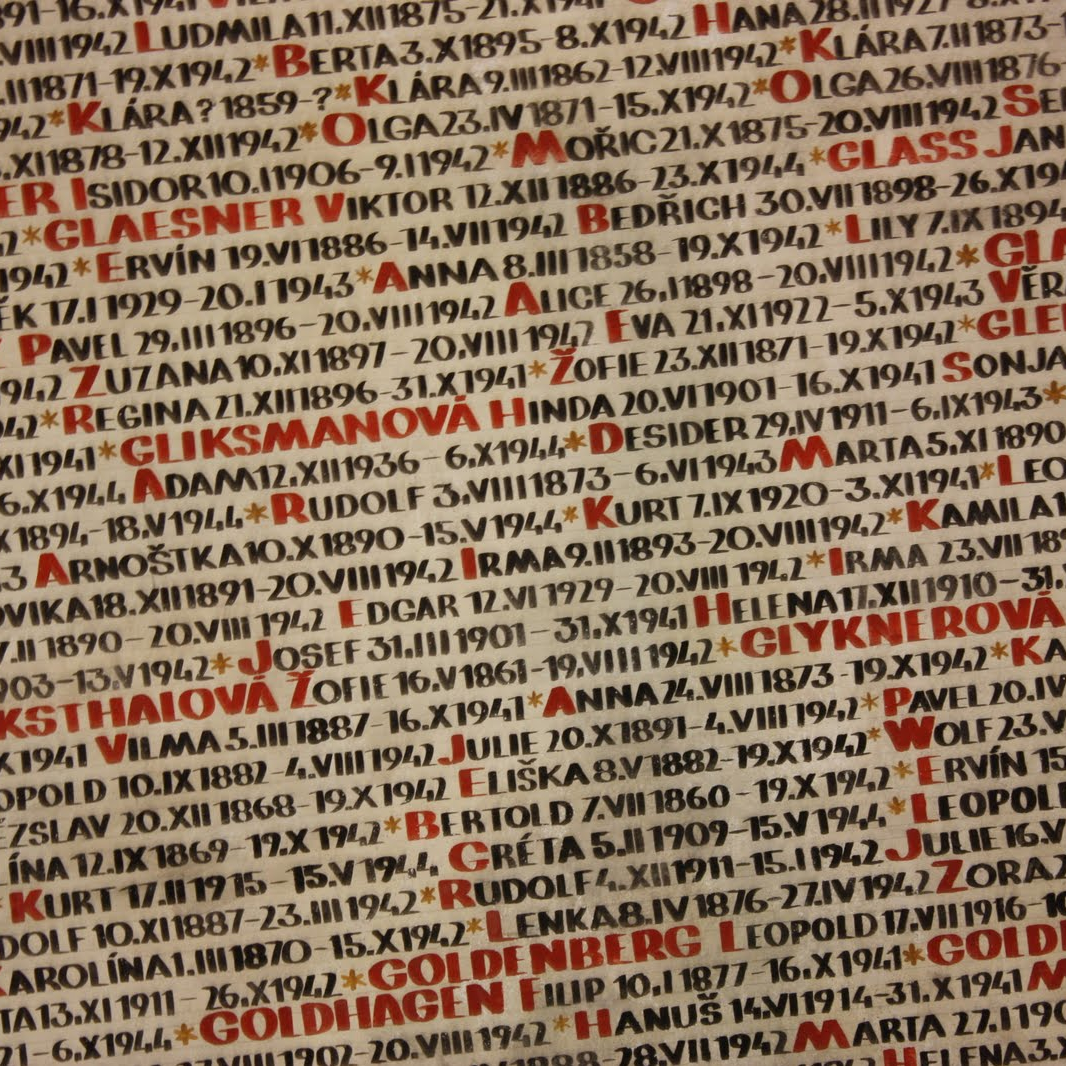 Antisemitism is not the same thing as hatred of Jews. Antisemitism entails the ascription of qualities to Jews that are felt to be ontologically inseparable from their ethnicity. These qualities are then set in opposition — ontological opposition, existential opposition — to the being and existence of other, equally reified ethnic groups, for example “Germans” or “Aryans.” But since the qualities so ascribed are social and historical in character, their social and historical location are separable from the ethnicities to which they are ascribed. And this means that in order to understand where and how these qualities take shape and persist we need to look not only at the communities to which they are ascribed, but even more to the social and historical landscape in which they appear.

Greed, money, unrootedness, conspiracy, secrecy, or rootedness to a foreign soil are not qualities that are ontologically immanent to any individual or group. But they were and are qualities that terrified and continue to terrify and attract interest among members of contemporary society. In order to make sense out of these fears and attractions we may be tempted to identify the agents responsible for their preponderance: bankers, industrialists, immigrants, minorities, intellectuals. And once we have identified the agents responsible for our hardship, we can then rid our community of these agents.

But this ignores the social and historical, supra individual, form of the agents who are actually responsible for our hardship. It is not that we are incapable, say, of incarcerating two in every five African American young men, or placing one in one hundred industrialists under house arrest at a country club prison. We can and do identify these individuals, remove them from society, where they cannot be seen, where they cannot do harm, and where we can forget them.

Two tragic consequences follow from this way of viewing agency. The first is that I am driven to reject, a priori, social and historical causation. Individuals and not social and historical forces are responsible for all that happens. The second consequence that follows from this view of agency is that I am driven to identify the individual agents who are responsible for my hardship; I am driven to the conclusion that I can remedy this problem by eliminating the individual agent: the banker, the industrialist, the criminal, the thief.

This ideology is terribly powerful in part because it is empowering. It seems to restore my agency and my ability to remedy my hardship, if only I can eliminate those agents responsible for my hardship. Note, however, that the community of those responsible for my hardship has now expanded. It now also includes those who, by calling my attention to social and historical agents, are attempting to undermine my freedom and my responsibility. In other words, the world of my enemies has now expanded to include all of those who embrace or advance a rigorous social, historical, or economic account of my hardship. These too now also must be eliminated since they are advancing the very ideology that denies my freedom and responsibility.

When the National Socialists rounded up and exterminated European Jewry they did so under the mistaken belief that the mechanisms responsible for their hardship were not systemic, that these mechanisms could be credited to specific communities of individuals (European Jewry), and that among those qualities characteristic of European Jewry, distinguishing them from Aryans, was the conviction that human beings are socially and historically formed and therefore that their qualities are not ontologically given.

(Not coincidentally, tragically, when Hannah Arendt adopted Martin Heidegger’s ontological fundamentalism and translated it onto the post-war landscape, she could not help but also reproduce her mentor’s purely negative concept of freedom, which helps to explain why she faulted not only those individuals who had fallen victim to their social or historical circumstances, but also those who believed that freedom is socially and historically constituted. The fault she found with Marxian social critique therefore was indistinguishable not only from Martin Heidegger’s, but also from eighteenth and nineteenth century conservative social critique in general, which held that modernism’s principle error to embed freedom in and account for it in terms of the social formations by which it is shaped. Since freedom cannot be shaped, according to this view, there can be no sense to reforming the social, political, or economic order in the hope of giving rise to greater freedom. Freedom is a purely inner quality, an individual subjective characteristic most perfectly granted by divine power. Which is why any attempt to reform the social, political, or economic order is also, by definition, taken to be an act of greatest impiety; a clear sign of human corruption.)

Even therefore when Jews sought to present themselves or even to become “something they are not,” i.e., non-Jews, they were faulted according to Nazi ideology for seeking to conceal their true nature and for surreptitiously trying to overturn the naturally-given order.

As I walk through the Jewish Quarter of Budapest I cannot help but be struck by this tragic and potentially mortifying irony. There is still an invisible wall around this quarter, not unlike the invisible walls around similar quarters in cities all across Europe, spatially separating this catastrophe from the persistent social and historical conditions that made it possible to begin with. For all around these quarters and even within them we are made to march to the incessant beat that says “we are all responsible individually for who we are, where we have come from, and where we are going.” And so each shop opens its doors and displays its wares for purchase by those individuals whom fortune has blessed, seeming to endorse the fiction that our material well-being, our intellectual prowess, our skill and our aptitude are matters entirely of our doing; which must of course mean that we are also individually responsible for our poverty, ignorance, and ineptitude. Individual differences are attributed to differences — and ultimately to deficiencies — in being. Those with plenty are thus inclined to account for their wealth not (as was once the case) by acknowledging their privilege, not by acknowledging the private, purely individual laws that govern and determine their unique, individual way of being, but rather by crediting their being as such. Similarly those with little are also inclined to account for their poverty as a consequence of their impoverished being, a defect in their individual souls. For how else can individuals who no longer believe in the social or historical nature of their own being account for such differences?

So skirting the boundaries of the Jewish Quarter and even penetrating the thin membrane that surrounds it is the very social and historical disease that originally brought about this catastrophe. But, like the Jewish Quarter itself, it is invisible. No one intends to make these fundamental distinctions. They meant only to preserve a certain notion or experience of freedom; freedom as the absence of constraint, freedom as the absence of social and historical determination, and so true individual responsibility.

Such is the ruse, the conceit, of neoliberal economic practice and also of neoliberal theory. Its complaint against social, public economic policy aims only to preserve individual freedom and responsibility. It does not aim — at least not initially — to isolate or condemn any specific group of individuals. And so we cannot mistake its surprise, when Jews are loaded into box cars or African American men into prisons, as anything but genuine. They really do not grasp the connection. Indeed, they are ideologically predisposed to deny the connection. For were they to acknowledge the connection between economic or social conditions and freedom, this would completely destroy their ontologically fundamental, ungrounded, neo-Kantian notion of freedom. They are therefore compelled — as Friedrich von Hayek was compelled — to account for these catastrophes by symbolic inference, not by causal explanation. (Again, because causal explanation would undermine their ideological foundation.) Since Nazis implemented social controls on German society, social controls are, by definition, the evil that caused the catastrophe. Nazis, Communists, and FDR — all three and the British Socialists besides — all implemented social controls; all leading us down the “road to serfdom” as Hayek would have it.

Herein concealing the real elements of antisemitism, the social formation, capitalism, that brought and still brings us to deny, or ignore, the social and historical form of our own being. Which may explain why I shudder in horror as much when I am walking along the streets of Budapest lined with high-end shops and luxury goods as when I am walking through the Holocaust Memorial or the former Budapest Ghetto.

Are we sowing the seeds of another Holocaust? Indeed, I think we are.