Oh, and did I say? Spirituality cannot be touched, held, measured, weighed. I know all of this. Which is why I like relics.
You see, I am an historian. And I am therefore deeply troubled by the now five and a half century old religious trend to deprive religion of its historical and social body, to collapse religion down into the unseen feelings or emotions of individual believers, depriving it of its place in time and space. For religion that exists outside of time and space can have no place in a science whose objects of interest are by their very nature temporal and spatial. Yes, detemporalized, despatialized religion might “exist,” but only on a plane where even the term “exist” can make no sense. It cannot be touched, weighed, seen, or held. And so it cannot be an object of my science. But I like relics. 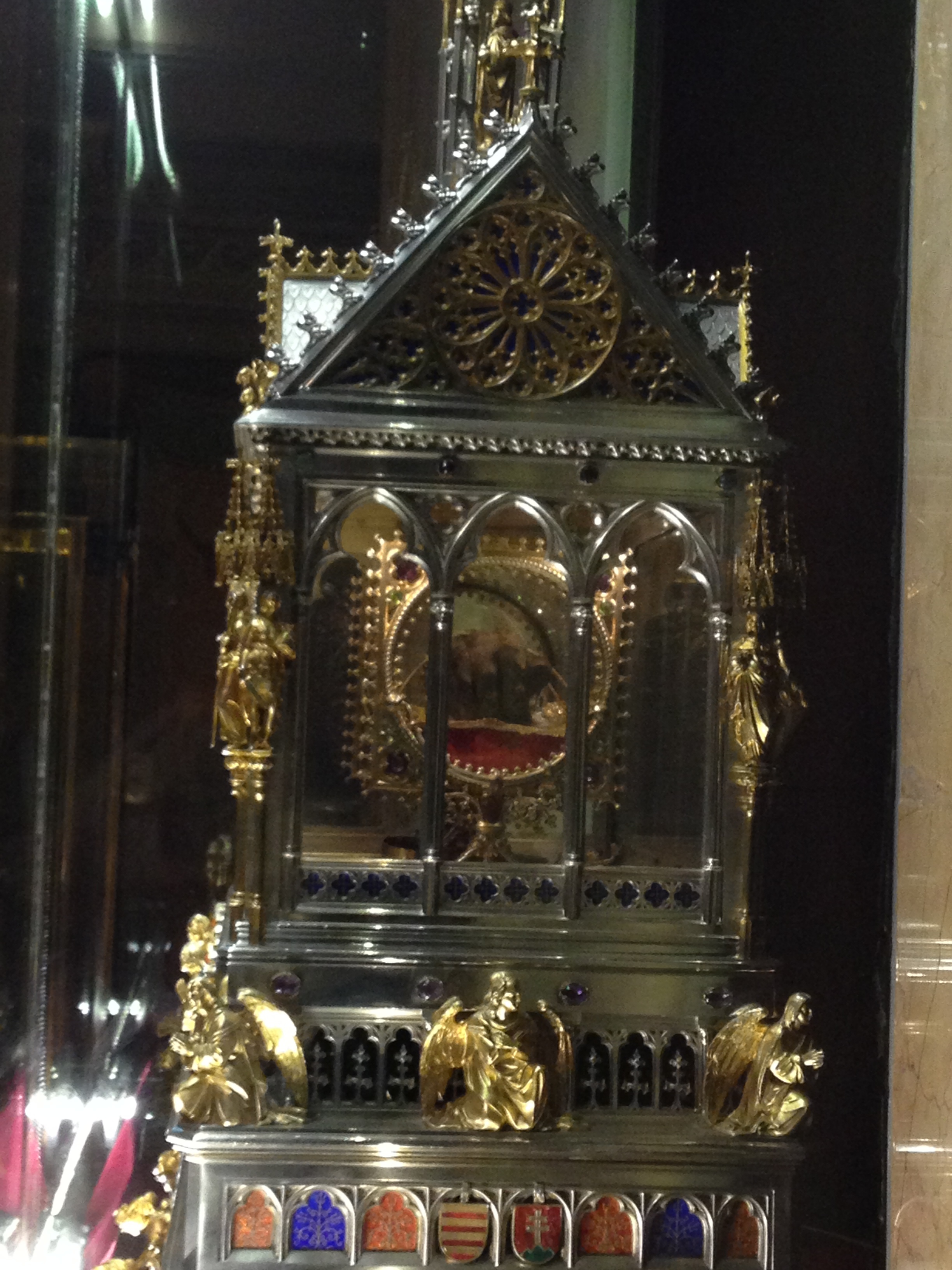 To be sure, there is a danger here. Where religion is physical, where it occupies time and space, it can also occupy us. Here in the Balkans, many communities are — how should I put this? — pre-occupied by religion. We pass from Orthodox to Catholic to Muslim territory, evident not only in the religious practices of the communities who live in these territories, but also in the frequency of mosques or churches, the shapes of grave stones, the tolling of bells, or the calls to prayer. These material signs remind us that religion has a body, that it has several bodies, that it occupies space and time.

In the late Middle Ages and the early modern period, the sacred doctors of the Church determined that religion no longer had a body and that bodies could no longer be religious. (In the Counter-Reformation, the Catholic Church sought to revise and soften this determination through the extravagant display of religious bodies, but to little avail.) What followed was the proliferation of bodies defined solely by their objective, eternal, unchanging physical characteristics. The spirit was then free to occupy whatever non-physical, non-material, non-temporal space it wanted. Clearly, however, it is not quite that simple. Bodies — religious bodies — remain both here in the Balkans and elsewhere. And, yet, something has changed. What is it?

What has changed, I think, is that the sacred or divine has grown immune to the wounds left on the surface of its body. What do I mean? Well, take the wounds inflicted on Jesus’ body during his passion. In iconography from the second to the fifteenth centuries these wounds survived Jesus’ resurrection and ascension and were visible in heaven at God the Father’s right hand, so to speak. But, then, in the fifteenth century these wounds proved incapable of making their way into heaven, where passion and passibility were increasingly felt to be forbidden. God — true God — knows no suffering, no weakness, no wounds, no passion. True God no longer has a body; or, rather, the body that God now has is absent the imperfections still visible on the body of the pre-resurrection, pre-ascension Jesus.
Iconographically, this is the equivalent of the children’s rhyme: “Sticks and stones may break my bones, but words will never hurt me.”

Which may help to explain why it was not until the early modern and the modern period that religion becomes the occasion for widespread, officially sanctioned mass death. Yes, I know; what about the Crusades? Yes, what about the Crusades. There is a wonderful web site that deserves our consideration, http://necrometrics.com. What it shows may surprise you. But, then again, maybe it won’t. What it shows is that when religious practitioners held bodies to be sacred, they were both less inclined to sacrifice their own bodies and less inclined to kill the bodies of others. Which is why, as a percentage of the world’s population, far more lives would be taken in the early modern and modern periods than were ever taken during the Crusades. Sacred bodies, material relics. If “sticks and stones” do not touch the heart of my faith, my belief, my religion, then I am free to use them liberally without fear that in annihilating the body I have done anything to damage the soul, whether mine or another’s. 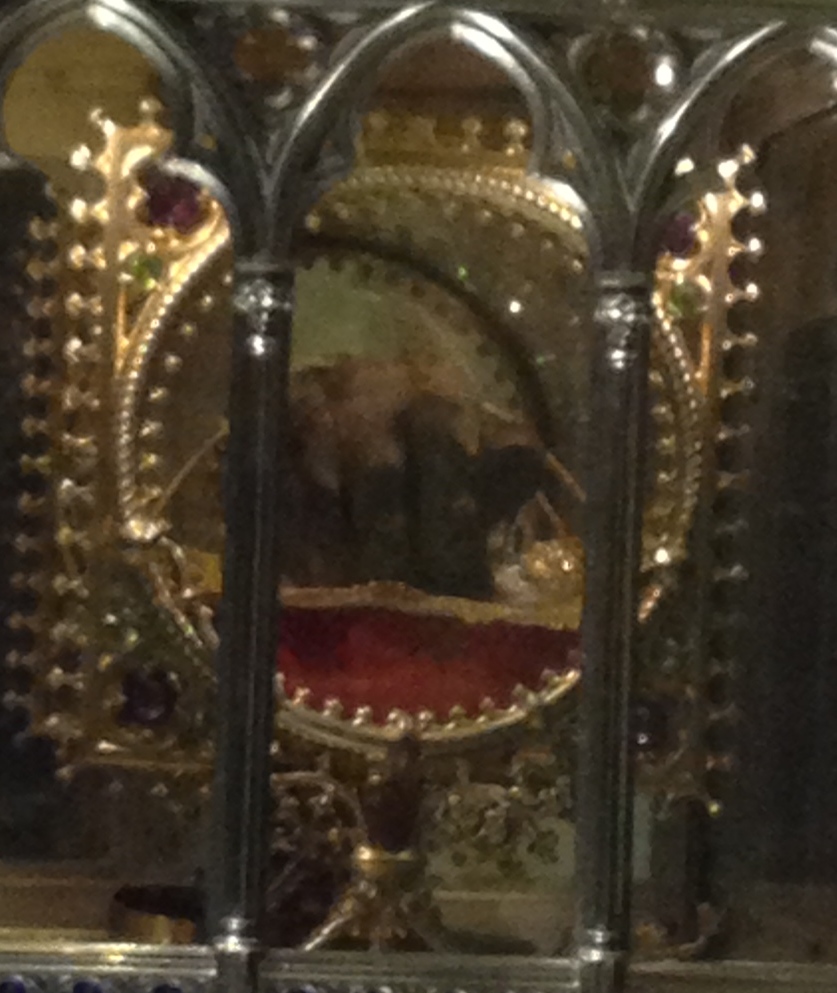 There peering out at me from behind the glass are the knuckles and fingers and forearm of Saint Stephen, who is held to have introduced the Christian religion to Hungary. They look weak, discolored, deformed, ugly. And I am wishing that all religious objects appeared to us in this light; not strong, bright, healthy and beautiful; the exact opposite of the victorious knights and kings and bishops perched above the dead and dying bodies of their enemies: but weak, defeated, poor, and suffering bodies, historical bodies, temporal bodies, which are also and for this very reason sacred bodies.