When Professor Damir Arsenijevic came to UC Berkeley as a Fulbright Scholar in 2010, I remember speaking with him about the position of “the Turk” in his native Bosnia and Herzegovina. I shared an article, “Anti-Semitism and National Socialism: Notes on the German Reaction to ‘Holocaust,’” which Professor Moishe Postone wrote shortly after the release of the television series “Holocaust” in the German market. Professor Postone’s article still strikes me as a valuable place to begin a conversation about “the Turk” not only in Bosnia and Herzegovina, but in central and (increasingly) western Europe as well. Yes, like all people living under relatively poorer economic conditions but able to avail themselves of regions that enjoy better economic conditions, citizens of Turkey have made their way to more prosperous regions of central and western Europe. And, like people everywhere, not only have they brought their own practices with them, but they too have shown a reluctance to embrace wholesale the practices of the peoples in the places to which they move for purely (or primarily) economic reasons. 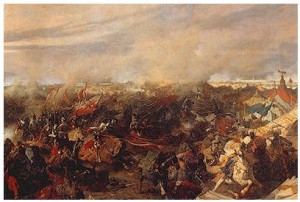 But “the Turk” holds a different position than, let us say, “the American,” or “the Canadian,” or even the nationalist or mainland Chinese immigrant to Germany or France or England. For unlike these imaginaries, “the Turk” is also a potent historical figure, physical evidence of a history that persists among us even after the events by which it was ostensibly composed— the Battle of Mohács (1526), the Battle of Vienna (1683) — rest in the distant past. And when in the nineteenth century a rising educated Balkan bourgeoisie fought to seize a greater share of the political power, they identified ethnicity, nationality, language, and (most potently) religion as the most effective weapons wherewith to challenge the legitimacy of dynastic succession. If they were to survive the waves of nationalism and democracy sweeping their regions, monarchs had at the very least to adopt the language and religious symbols of their bourgeois opponents (B Anderson, Imagined Communities,1982). Thus it was that monarchs and bishops whose predecessors had governed multi-ethnic, multi-religious entities were compelled to embrace the radical nationalism and ethnic and religious exclusivism of the increasingly militant middle classes.

This could suggest that “the Turk” is an anachronism, an obsolete cultural form ill-suited to the contemporary world. But “the Turk” is as much a product of our world and a constituent component of it as the microchip or social media. For, so long as we occupy a world composed by the global flows of capital, communities will continue to follow these flows and compose themselves — or, rather, will continue to be composed by these flows — in socially and historically specific ways. So that, although we might want the individual elements, the individuals, composed by capital flows to assume the general, universal form of the commodity (which we imagine ourselves to be), these individuals will always bear with themselves the symbols of their own particularity, the sure signs, as is true of every other commodity, of their historical and social indigence. This historical and social indigence, this particularity, I will argue, is what we find so offensive and unacceptable and unnecessary, at least those of us who (mistakenly it so happens) believe we embody the commodity’s general or universal form.

To differing degrees and in different ways we all of course embody the commodity’s general or universal form. Insofar as our thought forms, experiences and actions are mediated and structured by the abstract value form of the commodity, we all feel the push and pull of its universalism as well as the embarrassment — and also the attraction — of the particularities by which this universal is necessarily born along. But some of us — those of us who have submitted to the discipline of knowledge and practice that grants us unique access to the commodity’s secrets — enjoy a particularly close relationship to the commodity’s abstract, general form. And for us, I will confess, the residual particularity that clings to individuals and communities less fully integrated into the dominant form can strike us as specially obnoxious.

But why? In part our distaste for “the Turk” can be credited to the way that their particularity exposes and calls our own particularity into question. We cannot shed our bodies. And it is the harsh light that their particularity sheds on our own — our language, our traditions, our laws, our culture, our religion — that helps to account for that “clash of civilizations” to which Samuel P. Huntington called our attention two decades ago. What Huntington missed is the way that the general, universal form always, out of necessity, must use the specific form as its container, its means of transit and transmission. This also helps to account for our inclination to mistake our own particularities — our language, laws, religions, traditions — for the universals they can never effectively be. When “the Turk” breaches our border, introducing his laws, his culture, his traditions, his religions into our nations — and does so without so much as a nod of gratitude for “the universality” that has allowed him to take up residence among us — we are faced with the dilemma either of acknowledging the justice and equality of all particularities, because all equally can be the bearers of the universal form, or of arbitrarily granting universal status only to a specific set, our set, of particularities; because we have the power and authority to do so.

But the dilemma is only apparent. The choice is not real. For even when we formally grant equal status to all particularities — to “the Turk,” “the Jew,” “the Christian” — this purely formal ascription does nothing to erase the actual particularities, the differences that distinguish us from one another, or the desire that all individuals and their communities subscribe to and endorse the universal. Formal equality, which is grounded in that universal, does nothing in other words to eliminate the political drive to eliminate the particular.

We experience this drive in a number of ways in the US. In the US, “the Turk” was once an Irishman, a Chinaman, an Italian. Today “the Turk” is more likely a Spanish-speaker. Notwithstanding political losses, there is still widespread and growing hostility to undocumented immigrants, specially native Spanish speakers, but also speakers of Farsi and Arabic, who, it is felt, take jobs that would otherwise be taken by documented citizens, and whose religious practices, particularly among immigrants from the Middle East and South Asia, are felt to be at odds with the value orientations of documented citizens. Such immigrants, it is felt, should “lose their particularity,” which in this case means their linguistic and cultural particularity and adopt the “universal” language and religious sensibilities of their adopted country. The “English-only” frenzy has swept large swaths of the United States and, of course, there continues to be widespread opposition to building mosques and other non-Christian or non-Jewish buildings of worship and learning.

But this drive to eliminate particularity also appears in the public’s schizophrenic response to the Christian Right, which wrongly claims that it is preserving the cultural heritage of the United States. As far back as the Treaty of Tripoli (1797), signed by John Adams, the US has been officially on record as “not in any sense founded on the Christian religion”:

As the Government of the United States of America is not, in any sense, founded on the Christian religion,—as it has in itself no character of enmity against the laws, religion, or tranquility, of Mussulmen [Muslims],—and as the said States never entered into any war or act of hostility against any Mahometan [Mohammedan] nation, it is declared by the parties that no pretext arising from religious opinions shall ever produce an interruption of the harmony existing between the two countries.

Yet, clearly many Americans have been uncomfortable with President Adams’ and the United States’ official universalism. And so they want to eliminate human and civil rights protections from classes of individuals they believe less well suited to American particularity (which they, again, mistake for the universal).

The universal, however, is by definition not any particular thing — not any language, set of laws, religion, cultural tradition. To the extent that we are all connected in some kind of historical universal, we are connected by the universal value form of the commodity, whose very essence is the mere utility it makes of particularities, whether Turkish, German, Christian, Bosnian, Croat, or Serb. These particularities are, at best, bearers of this universal. But they are also impediments to its frictionless concourse. The universal value form both requires, but also disdains bodies, which it uses as mere pretexts for its transmission and reproduction.

The answer I believe is that “the particular” will only disappear once its universal container is exposed and eliminated. This is because bodies are ill-suited as bearers of the universal, by which they are invariably destroyed. Instead, we need to develop techniques for cultivating and caring for particularities, and for the bodies to which they are rightly bound. “The Turks” are driven into Germany, Austria, Hungary, the Czech Republic because the abstract universal value form of the commodity is the only means we have for sustaining particular bodies. But, what if, instead, we made cultivation and care for particular bodies our universal objective? What if instead of limiting and controlling access to the universal form — instead of making access contingent upon embracing the universal language, religion, law, and culture — we set our minds to caring for particularity?

Anyone who has been to Sarajevo knows what this looks and sounds and feels like. It looks like a Bazaar where individuals from each community share their wares under the safety of state protection. It sounds like a cacophony of languages, music, prayers and practices. And it feels like a space where nothing at all is universal, but where all particularities enjoy the liberty to move and share and grow.

But of course recently, under the pressures exercised by privatization and deregulation, those individuals deprived of their bodies or threatened with loss or injury to their bodies, whether by economic hardship or state action, find themselves increasingly at odds with the “universals” that hem them in and limit them. And, just because hunger, need, and danger call attention to our particularity, to our dependence, they can also elicit resentment by those of us who are privileged to enjoy the benefits of the universal. But I suggest we not allow ourselves to be deceived. I suggest, instead of punishing and limiting the particular, we challenge the legitimacy of the value form that has brought this particular into such a position of need.

This will entail acknowledging that “the Turk,” like the non-Turk, is a social and historical construction. It will entail exploring the social and historical forces shaping the great modern migrations, but also shaping the resurgence of militant cultural particularism. And it will entail diagnosing and treating the causes of conflict not by promoting the social form that gave rise to this conflict in the first place, but by seeking to create a world where particularities, individual bodies, are safe and healthy.