During my seminars in south central Europe I have had many occasions to call the attention of my audiences to a disturbing chart. The chart, generated by Robert Lucas, Jr., shows the percentage of national economies since 1800 experiencing economic growth. 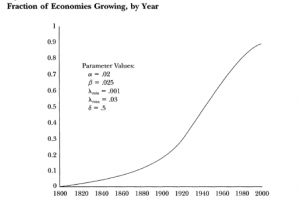 More importantly, within the context of Lucas’ Lectures on Economic Growth (2003), where it falls in a Chapter titled “Macroeconomics of the Twenty-First Century,” it is designed to show how, after two centuries of conflict, struggle, and resistance to adopting and internalizing capitalism, now over ninety percent of all nations around the globe have abandoned the laws, languages, customs, traditions, religious practices, and institutions that were once unique to them and, however reluctantly, have adopted the dominant legal, institutional, and cultural forms that mediate social, economic, and political relations the world over. Lucas and his colleagues, which, I believe, would include most economists no matter their stripe, count this as good news. What is more, I suspect that most traditional Marxists, would concur; capitalism is a necessary stage in global development, leaving in its path two clear groups: the industrial proletariat, on the one hand, and the bourgeoisie, their owners, on the other. On its way to reaching this final antagonism, however, capitalism removes and erases all other distinguishing characteristics — religion, ethnicity, language, culture — that might differentiate one worker from another.

For most people where I now live, in Tuzla, in northeastern Bosnia and Herzegovina, this chart generates high anxiety. On the one hand, there are many “local” and “regional” peculiarities that they would be delighted to lose: the oligarchy, for example, or political corruption, economic isolation from the rest of Europe, the highest unemployment in all of Europe, stereotypes in neighboring Croatia, Slovenia, and Serbia that continue to portray them as the remnants of the “Turkish horde” that overran their Christian communities a millennia or so ago. On the other hand, many also are anxious about the impending “necessity,” if they are to join the rest of Europe and the world, that they “shed” their local customs, practices, laws, and institutions — those qualities that distinguish them from their neighbors.

Let there be no doubt; Bosnians and Herzegovinians are “shedding their particularity” (to use a Hegelian phrase). My son’s generation — twelve to eighteen year olds — listen almost exclusively to British and American music; they watch American movies; and they picture themselves in their ideal future mowing the large lawn of an American home on an American cul-de-sac in the suburbs. 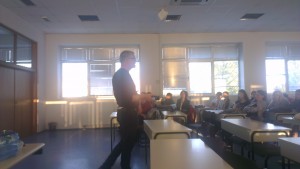 For the past two months and for most of the remaining weeks until our return to California next August, I am scheduled to speak in Economics Departments and Philosophy Faculty on university campuses throughout south central Europe. Invariably I share Lucas’ chart with my audiences and, generally speaking, so far, I have received the same response region-wide: a kind of exhilaration and excitement over the expectation that some time soon, within the next decade or two, Bosnia and Herzegovina too will be enfolded into the universal, homogeneous, global economic formation; but also this anxiety over having to shed what they deem peculiar about themselves, their culture, and their history. Is there no alternative? Can’t we have our cake and eat it too?

Which, for me, raises the question: What is Culture?

In the nineteenth century, capitalism was sold under the cover of “freedom” and, indeed, this is often still how it is sold. Freedom to buy Crest or Colgate, freedom to buy Levis and to purchase McDonald’s hamburgers on every corner; freedom to make more than the .67€ that Bosnians and Herzegovinians make per hour. Should I begrudge Bosnians and Herzegovinians the liberty to define their freedom not simply economically, but more specifically by the commodities they are free to purchase and enjoy? Don’t I do the same? Don’t we all?

Even when I think of long walks in Point Reyes National Seashore or simply along the Nimitz in the hills above Berkeley, would these walks seem so appealing did I earn the equivalent of .67€ an hour? Is there not just a tad of California aestheticism in the luxury I have to enjoy nature and fine cuisine — so-called natural goods — knowing that my culture, which is the dominant culture, need not disappear in order for me to do so? My “culture” is not disappearing. Lucas projects that I will “shed” nothing in order to enter fully upon my capitalist future.

So, what is culture? What is my culture? But differently, why do I miss latte’s brewed by my local coffee collective or Burmese Tea Leaf Salad from the Burmese restaurant down the hill? Are my collective’s lattes or my Tea Leaf Salad really tastier than Bosnian coffee or Ćivapi? I suspect not. But these things and tastes became so inseparable from my practices that they became me; they defined me. So, does the impending enfoldment into global capitalism about which Bosnians and Herzegovinians are so anxious and conflicted; does it amount to only this: growing accustomed to an alternative set of things and tastes and practices?

I am reminded here of a line from “Invasion of the Body Snatchers,” which in its initial screening in 1956 aimed to instill fear over the possibility that I might become so accustomed to Communism that I would not notice what had happened to me: “Oh, its not that bad. You get used to it eventually,” says one whose body has been snatched to one whose body is about to be. And so there is, it seems, something bordering on a natural fear that I will become, am becoming, something I am not or did not used to be.

And, yet, I would claim there is a difference; and it helps to explain why Robert Lucas’ chart is so frightening. And this difference strikes me every time I go to Sarajevo and to the Turkish Quarter. Not, of course, that I mistake the Turkish Quarter for anything like it once was in the fifteenth century. However, the lanes of stalls, each invoking a different ethnicity, a different religious identity, have existed side-by-side for well over a half a millenia and, at least under the Ottomans, did so peacefully. The Baščaršija or market was, of course, a market, a site of economic exchanges. And, yet the Baščaršija was also contained and limited. It was not everywhere. Nor did it mediate all of the social relations within Sarajevo. But, finally, the presence of a Jewish lane or a German lane or a Turkish lane did not preclude the presence of other lanes, other paths, other ways. They were not trying to be, nor were they anticipating that they would one day become one worldwide market, much less one worldwide culture. 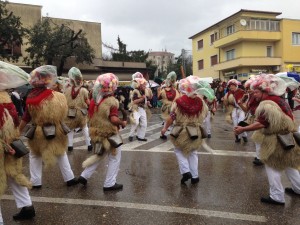 This is not the case with Robert Lucas’ chart. Not that different peoples won’t occasionally don their colorful clothing, sing their exotic songs, and perform their exotic dances — so long as there is money in it. But unlike the Baščaršija in Sarajevo, Lucas’ chart does contemplate the creation of a singular, uniform, homogeneous culture — one lane, one path, one stall. Indeed, according to Lucas, we are already 90% there.

And this is frightening.

If you plan to visit Eastern Europe and plan to drive, you will need a good GPS. We have still not purchased a good GPS. But perhaps we do not need one. Last fall you may recall we traveled to Beograd (Belgrade), Serbia, for a short vacation. Our Google and Booking.com directions got us nowhere fast. What is more, because of the oligarch-controlled mobile industry in Bosnia and Herzegovina — think Mexico on steroids — there is no use in trying to phone; your minutes will drain from your account in seconds. But then stuck in the middle of one of the largest cities in Eastern Europe a man in a car pulled up next to us and began speaking in Serbian. After ascertaining that we were American, he quickly switched into English, telling us that he was our proprietor and inviting us to follow him.

He actually was our proprietor!

Dumb luck you say. Well, yesterday, during the busiest festival day of the year, we are stuck in traffic outside of Matulji neighborhood in the seaside Croatian town of Opatija. Carnival. The streets are closed. It is raining. We think that our apartment is somewhere on the other side. But of course we cannot reach that part of the city by car. So we decide to park, get out and walk. We walk and we walk. And we walk and we walk. Eventually we stop a young man on the street walking a dog. We show him the address of the apartment and he says, “Oh, that’s my address. I will take you there.”

It actually is his address. He actually does live there. And his father is our proprietor!

I do not believe in magic. Nor do I believe that there is a divine GPS somewhere keeping me on track. What I do believe is that something like the narrative in the movie “Tree of Life” is playing out in our lives. Grace happens. Sometimes we deliver it. Other times it is delivered to us. And some times we wish it would appear, but it doesn’t. It is absent. And we feel it. We feel its absence.

So will that deter me from purchasing a GPS before my next trip? No. I have wasted way too much time lost on the roads of Eastern Europe. Not, however, without a little grace.