It makes sense that my first published article in Eastern Europe would be titled “Možemo Li Živjeti Bez Države? Možda” in the Proceedings of the 9th International Symposium on Corporate Governance (20-21 June 2014), The Place and Role of the State in Economic Regulation. The symposium is being held at Banja Vrućica, Republik Srpska, a “wellness center” located outside the town of Teslić. Is the only reason I never went to these kinds of places in California (eg Esalen, Asilomar, etc.), is that it was always on my nickel? Or was it also that I don’t believe these privileged spaces ought to be privileged spaces? 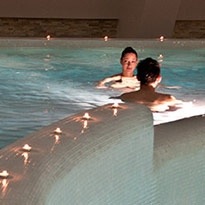 You have heard me talk on these pages of the oligarchs. Well, this is where they hang out. The parking lot is packed with BMWs, Porches, Mercedes — big, mostly black, “penis” cars. Here is where the booze and the under the table deals flow, generous gifts from the meetings sponsors: the Republic of Srpska Securities Commission, the Banja Luka Stock Exchange, Nova Banka, and others. And, yet, surprisingly most of the talks, including my own, were outspokenly critical of the oligarchy, recommending greater state control and regulation, and faulting neoliberalism for economic chaos in the Balkans. So what gives?

First, I am slowly coming to terms with the incoherence of most critiques of oligarchy. Is the oligarchy anti-democratic? Sometimes. But when it serves their interests, they are completely comfortable pitting the populace against the elites. Is the oligarchy anti-state? Sometimes. But when they are the state, which is the case in the Balkans, and where state regulation serves their interests, they are also entirely comfortable pouring more money into the state and through the state to their private interests.

Second, there is a very intimate relationship between the oligarchs and the academics. To be sure, this also holds for the University of California, Berkeley, which is an increasingly privately funded educational institution for the very wealthy. Think Haas and Shell. You want a great public education in California without the strings of private corporations attached? Go to Stanford, which has a sufficiently large endowment not to have to ask for corporate hand-outs. Not all economists in BiH are corrupt. And not all departments. But just as in the US, so in BiH, corporations are sophisticated enough to work all of the angles. (Remember my first paying gig was writing articles for the genetics industry.)

Third, when we are asked to speak at these events, where we enjoy a large, captive audience of bankers, corporate leaders, statesmen and economists, I think that we have something to say that is important. Do I think that what I said will change many minds? No. They know that without financial, political, and institutional backing, economists like me are no worse than a minor nuisance. And, yet, my presence here — along with many others — may serve as a persistent reminder that we are not going away and we are not holding our tongues.

So, what did I say? Look, even our universities treat oikonomia and politeia not as two different ways of governing, but instead as two entirely different fields. In fact, oikonomia mediates social relations despotically. It is one way of governing. Another way of governing is politically — what in Latin is called “res publica.” In republics, equally empowered and equipped citizens govern openly, deliberately, together for the public good. No invisible hand here.

This is what has happened: since 1776 nearly every new state has fashioned itself a “republic.” And some have come close to achieving this goal. By equipping all of their citizens to share in governance and by empowering them to govern, some states actually come close to being republics. But increasingly, most states that call themselves republics are in fact mediated by oikonomia, that is despotically. The Greek word despotes simply means “manager.” And so we could say that most of our states aspire to being managerial states. We want good managers. And we often field slates of candidates with “solid business credentials,” which only proves that they have experience telling employees what to do. That is the way private enterprises are supposed to work. But when states aspire to model themselves after private enterprises, they are no longer republics, but despotisms.

Again, the question isn’t whether there should or should not be private enterprise, but whether private enterprise should provide the model for the state. Does such a model work? Of course it does. Think of any well-run business. The best run businesses even offer employees some opportunity to share feedback. But private enterprises are are governed in a way completely contrary to republican self-government. That is the point that needs to be made.