I am hoping that I never fully process the horrors of Srebrenica-Potoćari, where for eight days in 1994, from June 11 to June 18, Serbian nationalist troops under the command of Ratko Mladić committed the unthinkable act of genocide, killing over unarmed defenseless men and boys between the ages of 12 and 77. Since the details are readily available, I want instead to relate my own thoughts on this unthinkable deed.

Our guide was a survivor who was twelve years old at the time of the genocide. He could easily have been separated with the men as was true for his cousins. His account was chilling.

I was of course struck by the graffiti on the walls of the barracks that housed the Dutch soldiers who were responsible for the safety of the Bosnians who had escaped to this United Nations “Safe Area.” Even though I had seen the graffiti several times before in museums and exhibits, walking through the rooms that housed the soldiers somehow made the graffiti more real. 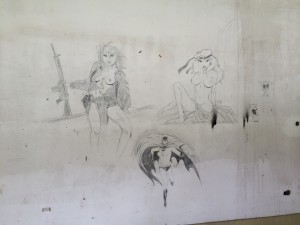 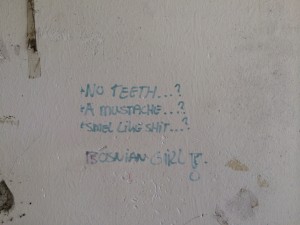 I remember a glossy magazine patterned after Home and Garden resting on a coffee table in a cozy B&B that Kirsten and I stayed at in rural South Carolina. Only the title of this magazine was Guns and Garden and in addition to the spreads on picture-book estates and sprawling country gardens, the magazine also featured buxom models in bikinis toting assault rifles. I also remember a bumper sticker I saw on a Prius before we left Berkeley: “I’ll keep my guns, freedom & money.” And I am struck that the strange mix of militarism, misogyny, and and violence that I am viewing in these barracks is probably not all that odd. And I am wondering whether any studies have been conducted about the graffiti in other barracks or dormitories that house soldiers. 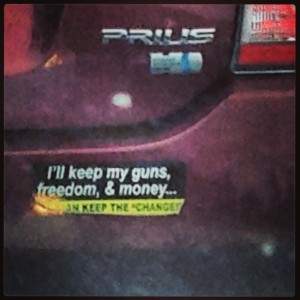 But I am also struck by the way that I and the others in our group sprint to personalized stories in the face of this horror. Many of these stories are entirely appropriate, such as the story related by a young Serbian man and his Serbian wife, now living in Boston, who were children when the genocide occurred. The Serbian man appears visibly shaken. He wants to apologize. He wants someone to apologize. He feels terrible. His wife’s family was “cleansed” from Croatia when Croatians decided that they were no longer Yugoslavian. She recalls the terror she felt when the police came for her father. When he was released two years later, he was malnourished and grossly under weight.

Yet, the recurring question, “how could anyone do this?” — a question for which, I believe, there are no satisfying answers — skirts the more pressing question: “How can communities of people do this? — a question for which we have very satisfying answers. I am reminded of the mantra I heard over and over and over again on the lips of ordinary people in Hungary, the Czech Republic, Croatia, Montenegro, and Slovenia, in public museums, from intellectuals . . . “the Turkish hoard.” How can individuals who have been raised repeating this mantra, whose public institutions repeat this mantra, whose public officials and teachers repeat this mantra; how can they not murder those whom they mistake for the Turkish hoard among them, those with Bosnian last names? If we believe, as many do believe, that ethics and morality and responsibility are completely isolated from the social, political, and economic worlds we come from — that we are born hard-wired “good” or “evil,” “Christian” or “Jew” or “Muslim,” that these are not choices, but states of being; or if we believe that our state of being, my state of being, enjoys a direct line to eternity; then how can I possibly tolerate those who are not hard-wired as I am?

And, yet, we regularly tolerate — no, we encourage and often even require — the repetition and reproduction of these hateful ways of thinking so as not to offend the beliefs of those among us who are committed to hatred. Or we completely ignore the close connection that has been found between peaceful co-existence and the absence of want, absence of fear, in contexts where diversity is cultivated.

So the question, collectively not individually, is why is what happened in Srebrenica not happening everywhere? Of course, we can point to Syria and to Palestine or Ukraine. We can point to Russian homophobia and to rampant Asian hostility to Africans. We can point to all of these troubles. And we should. At each of these places a Srebrenica is waiting to happen. Which is why Hannah Arendt was so troubled by how terribly normal she found the perpetrators of the Holocaust. Srebrenica was committed by people like me. That was Arendt’s conclusion. Indeed, when we ask what kinds of people commit such crimes or when we seek to identify the kinds of people who don’t — individually not collectively — we are in fact engaging in the same kind of thinking that led to the crimes in the first place.

We should instead be asking in what kinds of societies — collectively — are such crimes less likely: societies that welcome difference; societies where all are cared for; societies where all are safe, fed, housed, and loved. And, yet, even in such societies — even among the Dutch who were charged with protecting the Bosnians — there can be horrific breakdowns. (Anecdotally we heard that among those soldiers who failed to protect the Bosnians, 8 have committed suicide; itself a tragedy.)

Finally, I was struck by the women we met in Potočari who made lunch for us and who meet together for support. Kirsten felt that they were her age or even younger based on the ages of their children. Yet their faces looked worn, sad, haunted, as undoubtedly they are. 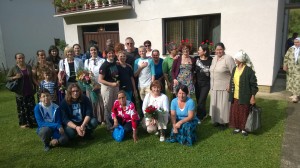 Outside of the staff working at the memorial, we saw no Bosnian men in Srebrenica-Potočari. There are none.