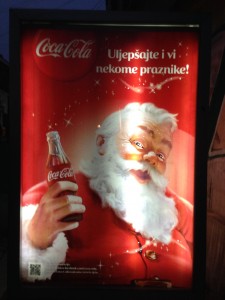 My family spent last Advent Season on the other side of the world, in a small city of 140,000 situated halfway between Sarajevo, the capital of Bosnia and Herzegovina, and Belgrade, the capital of Serbia. Twenty years ago, as the former Yugoslavia was being torn apart, Bosnians, Serbs, and Croats killed one another in large numbers. But whereas other parts of Yugoslavia successfully carved out ethnically pure enclaves suitable for membership in the European Union, Bosnia and Herzegovina remained remarkably diverse, both ethnically and religiously.

Tuzla, is about eighty per cent Muslim, ten per cent Roman Catholic, and ten per cent Serbian Orthodox. There is also a significant Roma population, what used to be called Gypsy. But since, as far as we can tell, Roma killed no one in the recent wars, they are also not counted in the census.

Bosnia is also very poor. It is the poorest nation in all of Europe. Roughly 75% of Tuzla’s citizens are unemployed. The average wage in Bosnia and Herzegovina is about $1.25 an hour, one-twentieth the average wage of workers in the Eurozone.

In so poor a nation composed mostly of Muslims, you might think that there would be no Advent Season. And as November slips into December, the first snows fall, and as the windows on our imported Advent calendars flip open one at a time, leaving only a half dozen or so shut tight, we too, like the Who’s in Whoville, fear that Christmas simply might not happen. 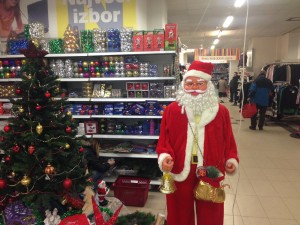 The first signs of Christmas appear, as one might guess, in the shopping malls that litter the city of Tuzla, megastore upon megastore packing their shelves mainly with the kinds of things that poor people can afford; the kinds of things sold in Walmarts or K-Marts in the United States. Then, on or around the fifteenth of December, an army of pink cheeked, rotund, but completely automated plastic Santas appear — literally dozens of them — taking up positions around Tuzla, their hips gyrating suggestively and their mechanical lips chortling English-language Christmas Carols whenever shoppers come within range of their motion sensors. Atop sheets of fake snow, surrounded by a fog of blinking lights, are boxes upon empty boxes wrapped neatly with wrapping paper and tied up with oversized bows. And then shelves upon shelves of Christmas decorations, Christmas tree lights, stockings, garlands, and fake metallic trees — here, in Tuzla, which I remind you is eighty per cent Muslim; Christmas is clearly happening. 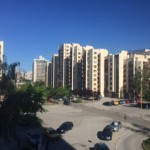 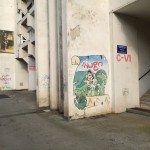 Mujezinovic,” named after the famous Yugoslav artist who painted canvases in celebration of Josip Broz Tito’s Partisan fighters and was himself a Partisan fighter before he became a famous artist. They have named our south side neighbourhood Sjenjak, meaning “shadows,” perhaps because of the steep hills that tower above our neighbourhood. Our high-rise lies opposite and next to six other identical high-rises constructed sometime in the 1970s to house Yugoslavia’s growing middle class. I call these apartment complexes “Tito Buildings,” so named after Yugoslavia’s founding father, Josip Broz Tito, anti-fascist leader of the partisans, founder of the non-aligned movement in the 1960s, who in 1958 did something that no other communist leader dared do or at least did not live to tell about it: he stared down Joseph Stalin, and he won. But today, no matter where you go in the former Yugoslavia, you will see these perfectly identical, absolutely democratic, Tito buildings littered about the centres of all cities of any appreciable size. Our Tito building even has a bomb shelter, just in case. 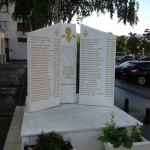 And in front of these buildings, including our own, are engraved marble plagues, each bearing far too many names for such a small city, listing all of those who once lived here, but who do so no longer.

A blanket of snow, real snow, not the fake stuff found at the Bingo Mall — real snow now covers Ismeta Mujezinovica. And along the Avenue, not for our benefit, certainly not for the benefit of the season, real horses jingle along tugging wagons overflowing with hay to feed animals and wood and coal to fire furnaces. The horses and bells feed my seasonal fantasies. The wood and coal do not. The furnaces and their fuel explain the thick dark haze that sticks in our lungs and conceals the sky throughout most of the cold winter.

But it is the third sign of the Advent Season that most catches us off guard: Santas. Real live Santas. But, first, I have to tell you about Tuzla basketball.

Last Fall, when we first arrived in Tuzla, members of our growing circle of friends, none of whom are specially athletic, introduced us to local Tuzla basketball. Two exchangeable marks, Bosnia’s currency (worth roughly one US dollar), buys you entrance to the equivalent of an American semi-professional basketball game. The local basketball team is called Sloboda, which means “free” or “liberated.” This is also the name of Tuzla’s semi-professional Futbol or “soccer” team. The term Sloboda recalls the critical role that Tuzla played during World War II, providing refuge for members of all ethnic groups fleeing from Nazi terror, but also serving as a base of operation for Tito’s Partisans in eastern Bosnia. Nearly a half century later, Tuzla served a near identical function during the most recent Balkan wars, providing refuge for Croats, Serbs, and Muslims who did not want to rape and kill one another, but wanted only for the violence to stop. Thus Tuzla is almost always referred to as liberated Tuzla, Sloboda Tuzla, both the city and its sports franchises. 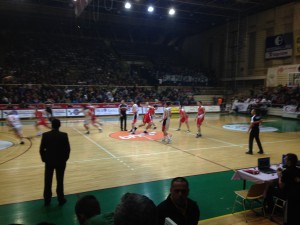 Tuzlans are huge fans of their Sloboda teams. Yet, without question their most faithful fan is a largish Muslim man sporting a bushy salt and pepper beard who for thirty years has never missed a home game, anchoring himself to his seat well before tip-off immediately behind the home end of the court. This faithful Sloboda supporter goes above and beyond most fans. For he also runs a barbecue stand along Tito Boulevard where he sells tickets to the games.

But it so happens that this čivapčiči-flipping Sloboda fan is also among the most devout members of the local mosque, one of fourteen such mosques that pierce the dense haze covering our city. Yet, whereas most Tuzlans seem oblivious to the ubiquitous and punctual calls to prayer, this man always piously rolls out his mat and sings praises to Allah and to his Prophet for, among other things, Sloboda basketball and Futbol.
I will return to our faithful Muslim in a moment. But, first, I must tell you about an important Yugoslav tradition.

It is mid-November when we begin to see signs posted all over Tuzla asking for donations of toys, clothing, food, candy, and what not. The signs initially strike us as simply one more indication among many that we live in a terribly needy community where relief organizations are doing their darned most to ease the suffering. But this is not what the signs mean this time. The donations, we learn, are part of an annual nation-wide tradition going all the way back to the earliest days of Tito’s rule in Yugoslavia. You see, Tito was not your average, run-of-the-mill Communist. Tito was aware that he ruled over a country whose peoples, while not deeply religious, were deeply committed to tradition. So, rather than suppressing these traditions, Tito chose merely to inflect them ever so slightly. To be sure, not all Yugoslavs were Catholic; and not even all Christians observed Christmas on the same day. (The Orthodox celebrate Christmas on Epiphany. Go figure.) Not to mention all of those Muslims, most of whom are Communists in any case. And you can’t forget the Communists. Tito’s plan was to have every factory select a “Santa” from among its workers every year, largely “for the sake of the children,” everyone said. The workers would then bring various toys, articles of clothing, food, books, candy to the factory during the months of November and December. Then on New Year’s Eve, the factory would throw a huge party for the entire community; and who would be there distributing gifts to all the children, but Saint Nick himself helping to ring in the New Year. And that is exactly what he had done for forty or so years.

But then beginning in the 1980s the economy started to take a dive. And to keep up with its international debt payments, Yugoslavia began to sell off its factories. The new foreign owners began to lay off workers, sell off their assets, and close the doors. No more factories. No more Christmas. It was that simple.

The Yugoslavs, however, were not so easily defeated. Remember: they had stood up to Hitler and then to Stalin. Certainly they weren’t about to let the Grinch of neoliberalism ruin their Holiday cheer. And so what had been a factory tradition migrated to the mosques and to other municipal organizations, and was eventually adopted by the cities; all of the cities, even Muslim cities like Tuzla. Christmas would come. It would come after all.

And this is where our portly devout Muslim, basketball supporter comes in. Because in our neighbourhood it is he who dons the red and white every December, shines up his brass bell, and wanders the streets ho ho’ing and handing out gifts to each and every child he passes— even (and this is highly unusual) to the Roma boys and girls who crowd everywhere with open and usually empty hands. Hearing the bells I run to the window to see what is the matter. He is there right now, across the street, handing out toys.

Christmas is coming to Tuzla after all. 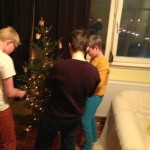 We eventually find a tiny little tree, but a real tree, in a Croat neighbourhood near our apartment block. And on Christmas Eve we invite all of our friends over to bake cookies and decorate the tree, mostly with decorations from the local Bingo, but also with some decorations brought in from Austria or sent by friends. And then at ten o’clock we gather our group together — composed almost entirely of Communists, Atheists, and Muslims — and we trudge the mile or so over to the Franciscan Mission. We are not alone. For it turns out this is what all Tuzlans do on Christmas Eve — Orthodox, Catholics, Muslims, even Communists and non-believers. They go to the Franciscan Mission to celebrate Midnight Mass and to sing Christmas carols.

The friend who brings us estimates that between eighty and ninety per cent of those who celebrate are Muslims, belting out carol after carol singing in praise of the child born in Bethlehem.

And, then, as though on cue, as soon as Christmas is over and as the New Year nears, Tuzla city workers set out to decorate their Old Town for the celebration of the real Christmas, New Years Eve, when Muslim Santas fan out across the city distributing gifts and food to all of Tuzla’s children. Even the Roma boy with the golden voice, singing his plaintive Gypsy songs to unyielding passers-by; even he receives a gift.

Tuzlans cling to this Holiday as long as they dare, which is shortly after Epiphany. But as January wears on the decorations disappear into locked closets in city garages. New Years festivities fade into the background as the banalities of seventy-five per cent unemployment once again bear down on the people of Tuzla.

But today if I close my eyes, I can still see a portly Muslim man across Ismeta Mujezinovica dressed in red with a white fringe, ringing a bell, singing ho ho ho’s to passers-by, and handing out toys to neighbourhood children, even to Roma boys and girls, which almost never happens, half-way around the world in a place called Tuzla.