It was almost nine months ago that I touched down in Sarajevo for my first visit to Bosnia and Herzegovina since my 2013-2014 Fulbright year. Followers of my Bosnia Journal Blog will recall the Erasmus + demonstrations, the memorial observances for the 71 youth who lost their lives in the shelling of Tuzla square (the general who ordered the shelling was released without any charges), and our gradual coming to terms with how terribly fragmented and dysfunctional Bosnia and Herzegovina’s public sphere was proving to be. But, most likely, followers will remember the February protests and the May floods. Now, two years later I have returned to Bosnia and Herzegovina to deliver the keynote at the International Association of Social Science Research (earlier today) and to visit old friends. 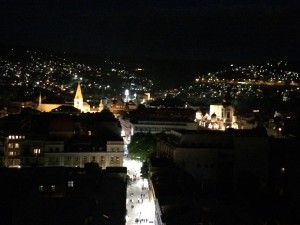 What strikes me after two years is that the questions being raised within the social sector have shifted. In 2014 when we returned to the United States, the Dita plant was still closed, Plenum — the social movement that had deposed six cantonal premiers and had generated a groundswell of mass political action — was all but dead, and the future looked very bleak indeed. Then, in Spring 2015, an administrative judge ordered the Dita plant reopened. The rump workforce, running only one line, was selling all of its product to Bosnia and Herzegovina’s largest local grocery store chain, Bingo. Spirits were high. The future looked bright. If only, somehow, the workers could come up with the millions it would take to pull Dita out of debt.

Since then a second line has opened. And the debt problem is still outstanding, looming even larger today, since Dita is actively soliciting offers to purchase its assets.

Two years ago, the workers laid off from Dita still dreamed of somehow reconstituting the old Yugoslav-era self-governing socialist plant. With Dita once again up for sale, this dream is no longer — was it ever? — realistic. And, yet, this has pushed another question to the forefront: since the privatization of Bosnia and Herzegovina was declared during a time of war and, therefore, of contested constitutional authority, were any of the sales ever legitimate? Under what law? Under whose authority?

In the polity of nations that count themselves full members of the global economy, subject to international laws, regulations, and understandings, there is a shared belief that public assets cannot without due process fall into private ownership. This, you will recall, was at the legal center of the public’s case against Ammon Bundy, Dwight Hammond Jr., 73, and his 46-year-old son, Steven, who, under vigilante authority occupied a U.S. Fish and Wildlife facility near Burns, Oregon. Can unauthorized parties seize and occupy, much less deface or damage, public property? If there is a question that better throws light on the privatization of Yugoslavia, I do not know what it is. Since 1944, Yugoslav workers had thrown themselves full-throttle into building what by the 1960s had become the fastest growing economy in the world. The physical plants and products of their efforts, according to Yugoslav law, were owned by the public. Yugoslavia owed much of its growth to the generosity of a US State Department eager to unload as much cheap money as it could onto a world whose consumers it desperately needed to purchase its goods. Josip Broz Tito’s Yugoslavia was among the beneficiaries of this largesse. Then, in 1979, in an effort to strengthen the US currency, Fed Chair Paul Volcker raised interest rates to 20%. That was the end of Yugoslavia. All of the unemployment, the inflation, the drastic cuts in social services and benefits eventually yielded precisely the general systemic failure that economists predicted should happen under these conditions. (Hey don’t blame us. We were right, for once.) It was in the context of the general systemic chaos and war that followed in the 1990s that Yugoslavia was privatized. Now citizens of the former Yugoslavia are beginning to ask under what laws and under whose authority their property was seized and sold out from underneath them. It is as though Ammon Bundy, Dwight Hammond Jr. and his son had seized and occupied the public lands of the former Yugoslavia. And, yet, since there was no one minding the shop, so to speak, the theft was retroactively judged legitimate. By whom? On what grounds?

In order to make this legal case stick, however, the former owners of these seized public assets need to mount a political campaign. They need to move a population still reeling under PTSD and near 50 per cent unemployment, a population that, with complete EU, UN and US cooperation is governed by the very thieves who stripped Bosnia and Herzegovina’s assets; they need to convince this population that the courts and the legislature are the right venues to adjudicate their claims. The alternative is the general regional war that more or less publicly everyone now expects; war to resolve the now almost thirty-year-old claims that no one in authority — not the UN, not the EU, not the US, and certainly not the oligarchs themselves — has the least interest in resolving.

Here is what happens in general regional war. It will not be contained. It will spread to Montenegro, to Kosovo, and Macedonia. It will spread to Croatia and to Serbia; Serbia will then recruit its allies in the Orthodox world to once again “defeat the Turks once and for all.” And the shock waves will course up through eastern Europe, reigniting ethnic and religious conflict throughout the region, spreading eventually into Russia. But it will not end there. The right wing in Austria, France, and Germany are sick and tired of US meddling on the continent. The right wing throughout the EU will enjoy a upsurge of support to put an end to US intervention in continental affairs once and for all.

So, what is the alternative? Responsible US and EU authorities need to seize and freeze the stollen assets of Bosnia and Herzegovina’s oligarchs, whose very success depends on their ability to conceal these stollen assets out of country. The US and the EU also need to commence proceedings in the World Court to identify and prosecute those responsible for the seizure of these assets. Finally, property needs to be restored to its owners ex ante along with sufficient resources to upgrade the defaced, damaged, and degraded facilities. After due process, any settlement with the oligarchs will have to include compensation to the former owners in such an amount that would permit them to upgrade and restore the production capacity of their facilities. Should Bosnians and Herzegovinians choose then to sell their assets, this must be done not at gun-point, so to speak, but through slow, deliberate, and open process. Much else also will be required. For example, since the multiple, endless layers of administrative duplication in Bosnia and Herzegovina exist solely as means to pay off political, ethno-nationalist patrons, Bosnia and Herzegovina’s administrative apparatus will have to be vastly simplified and streamlined, bringing it into line with, say, Germany, or Austria, or even France, whose public-private ratios are far lower than Bosnia and Herzegovina’s. Yet, with their assets frozen, there is good reason to believe that the patronage networks will shrink of their own accord. Perhaps then university rectors and deans might actually have to enjoy respected degrees in the fields they claim to have expertise. Perhaps then the police force will assume normal levels.

These changes need to come if war is to be avoided. Still, the good news is that Bosnians and Herzegovinians are beginning to see the privatization of Yugoslavia for what it was: an illegal seizure, defacement, and destruction of public assets and lands. That, my friends, is illegal in any country ruled by law.

Of all sections in Adam Smith’s Wealth of Nations, I think my favorite for the moment is Book I, Chapter 8.
When I shared this passage with Tuzla’s workers last night, they were astonished. For it is here that A Smith openly admits what all workers suspected all along; namely, that their penury arose from an original appropriation of property and capital in which they played no role but whose consequences they must endure with the full cooperation of their representatives in Sarajevo.
The passage begins as follows:
In that original state of things, which precedes both the appropriation of land and the accumulation of stock, the whole produce of labour belongs to the labourer. He has neither landlord nor master to share with him (I.8.2).
Neither landlord nor master. Unbelievable.